Voting As a Disabled Person

This blog has been written by our blind accessibility assessor, Alan Sleat, who explains what it’s like to vote for someone with a visual impairment.

Voting for local elections, government, or EU elections, can be difficult.  For everyone it is difficult to understand the politics and which party will best serve you, but for disabled people, there can be another difficulty.

How Accessible is it to Vote?

Now in the UK , there is a lot of ways that a person with a disability can vote which is meant to make the experience and voting accessible. Saying this, the various methods are not just for people with a disability, they may make it easier for everyone.

There are various methods, from postal vote, which can be done either by yourself, or electing a proxy to do it for you.

The polling station, should have everything that a disabled person needs to access the building and voting slips.

Myself and my wife have the same views when it comes to elections and normally vote for the same party, which is handy, and we are very open with what we think. However, not every couple are like that, or someone else who may be appointed to help someone to vote.

Difficulties As a Blind Voter

The difficult thing for me being blind, is that I do have to rely on my wife to fill in the postal voting slip, where I could want to be independent. Saying that, the postal vote will assist a lot of disabled voters.

I have not thought of this comment coming until writing this blog, but how do people find out about each parties views on different topics? Are there subtitles on the political party broadcast? I know there is no Audio Description, as I remember one broadcast, with 90% of the 5 mins, having no talking at all and not realising what was happening.

What About on the Internet?

There are still a lot of web sites that relate to parties that are not accessible to people that use assistive technologies.  On the other hand, by September 2020, all government web sites need to be accessible, which means each candidates web site as well.  It is great how things have moved forward concerning government and voting being accessible.

Now the polling stations in the UK have guidelines to make them accessible, although to be honest, I would not feel comfortable going to one as a blind person, I will share a story in a little bit.

What About Any Other Disabilities?

I think it is the journey to any polling station which is the worst thing, as the anticipation that the disability has been taken into consideration. Now it should have been, but at the moment, the embarrassment of not being able to vote independently, will be there for a while yet.

Experience As a Blind Voter

As promised, here is my story for voting for the first time after losing my sight (1999). As still stating on web sites, the polling card said: “if you need any adjustment when voting please ring…”. First of all, remember this is on my polling card in the text (not Braille). Now technology has come along now, but then, I had to rely on my Mum.

I rang the given number and stated my position, which they said not to worry, everything is in order.

On the day, I arrived with my family to vote, where I was presented with a piece of paper size A2, which thinking back on it, was divided into quarters. Well I did explain on the phone that I was blind and can’t see, so I thought it would perhaps easier for me to put the ‘x’ into the bigger box. However, as I said looking back, I am sure that there were more than four parties to choose from. Well I put my x in the directed box, as, I got my mum to direct me.

The next step was to hand it in? No. I gave it back to the person monitoring and they gave me a normal voting slip. Now, it was difficult enough to put an x in the last piece of paper, this one was a nightmare. I still have to go in the booth with my Mum and try to x the correct box. Stressful!!!

That was back in 1999 before postal votes and adjustments to polling stations.

How Others Are Affected

Now I am moaning about access to disabled people voting in the uk, but I have it easy and my vote counts, whereas, in Europe, it is a lot different.

“A damning new report paints a “bleak picture” for people with disabilities who want to vote in the upcoming European elections. The report, by the European Economic and Social Committee (EESC), outlines the multiple difficulties facing “millions” of voters with disabilities.”

Have a read of this article and I think be surprised on how  disabled people are treated when voting:

The right to vote dates:

When voting next time, whether postal or polling station, take time to look around and see how accessible the process is. along with any information about each party, can everyone access the information? 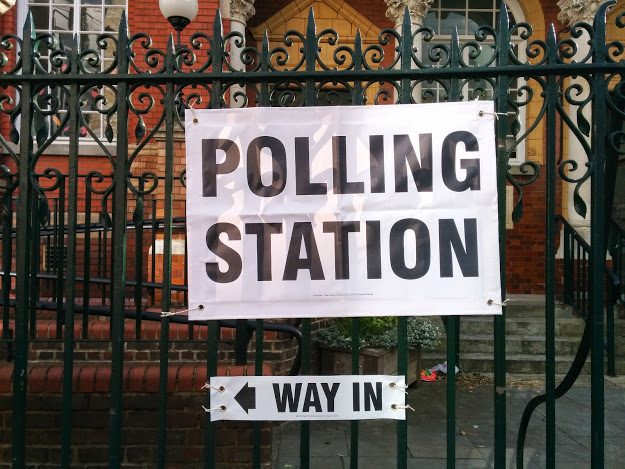