What is Section 508 and How Can You Become Compliant?

Section 508 is a clause that was added to a piece of legislation in the United States. That particular piece of legislation was the Rehabilitation Act of 1973, which was amended in 1998 to include Section 508. This clause “requires Federal [Government/public sector] agencies to make their electronic and information technology accessible to people with disabilities.”

As it mentions, it’s main aim is to ensure that public sector bodies within the United States are not discriminatory to those with any kind of disability. It affects all federal agencies, vendors, contractors and partners operating in the United States or abroad.

In 2017, the clause was refreshed to include updated guidelines and requirements for information technology in the federal sector. When talking about accessibility within the United States, the three other most relevant laws are:

Who Needs to be Compliant?

The clause should be referred to by any and all federal agencies that operate in the United States or serve Unites States citizens. However, it is not exclusive to just federal agencies, any business who serves or works for a federal agency, whether a vendor, contractor or partner, also needs to be compliant to Section 508.

This is especially relevant for those federal contractors and vendors who provide third-party services to federal services such as payment gateways and website forms. If you are not accessible, you are breaching Section 508.

Why Should I be Compliant?

Firstly, it’s important to remember that this is a federal law in the United States, whilst there is no directly enforceable punishment, it can and has been referred to in a court of law, especially in civil cases where a member of the public is suing a federal body for lack of accessibility provisions.

Whilst there are very few lawsuits relating directly to Section 508, If you are breaching the terms of this, you are more than likely breaching the Americans with Disabilities Act. This particular piece of legislation has been instrumental in the suing of more than 500 companies in federal court…in 2017 alone.

It’s also good for business, if you aren’t a federal agency in the United States, you could be losing out on more than 1/5 of your potential audience by making an inaccessible website, can you afford to do that?

How Can I Become Compliant?

It can be seen as a hassle to become accessible, but by making simple steps, you can drastically improve your website. In January 2018, Section 508’s technical requirements have changed to incorporate WCAG 2.0 AA and A success criteria, which have been developed by W3C. We wrote a simple guide to the WCAG 2.0 standards which outlines a simple checklist for those who want to create accessible content.

Alternatively, for accessibility help and guidance you can give us a call or leave a message and one of our team will be happy to help you make the most out of your digital services. 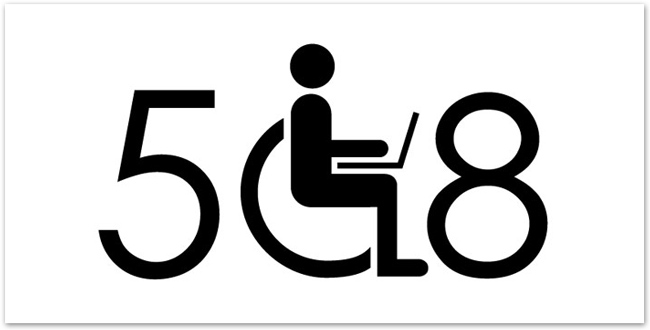